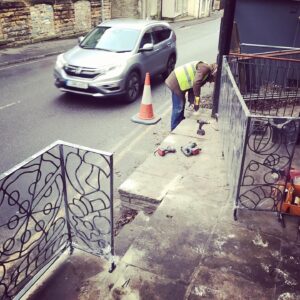 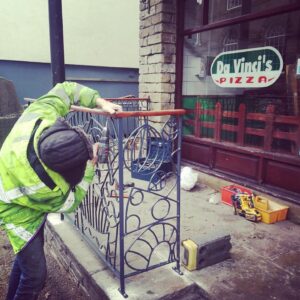 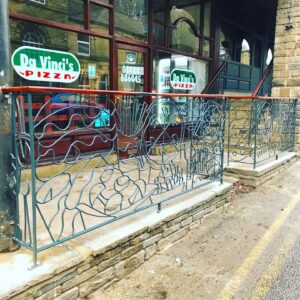 Last year i re-vamped the railings of Bengal Spice who are next door to Da Vinci’s on Dunford Road in Holmfirth. Those railings made Da Vinci’s existing ones look really poor by comparison, mainly because they were falling apart so they asked me if i’d make them some new ones. There was nothing worth keeping apart from the frames and the handrails so Steve and Tom just said ‘do whatever you want’, so i did. I drew out a design of the various food and drinks they sell on big sheets of cardboard and started to bend steel to the same shape to form the new railings. It was a really lovely project to work on, partly because Steve and Tom were really easy to work with but also because i could just have lots of fun with it. I’m also lucky to have some good friends who helped me every now and then with moving and siting them etc, in particular the very capable and hands on Martin Norman.