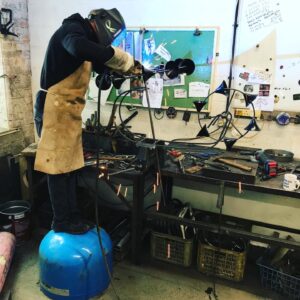 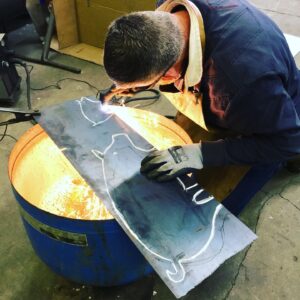 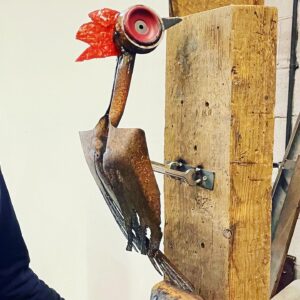 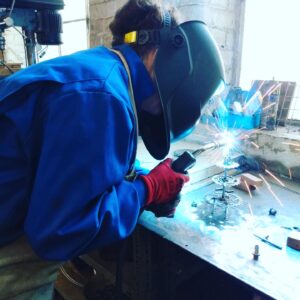 Well that’s it for this year’s sculpture courses, we think it gets too cold for the students from now on in until March when we bravely host our first course of the year and it was a really lovely one to finish on. We had three members of the same family up from Cornwall and Kent plus my mate Carl, who as usual all surprised themselves with what they were capable of making. First up in my room was Al with his very ambitious wind powered sculptural helicopter. Luckily i had loads of scrap cones from Ikea lights which nicely fitted the bill and saved Al a huge amount of time. Carl was bought a place on the course as a present and fancied making a pig weathervane which he easily did and went on to make a garden bird too. Lou thought she’d just make a flower for her garden but after completing that went on to make a woodpecker from an old shovel. Finally Zoe worked in miniature, making a cake stand and some shelves for the tiny fimo clay cakes she makes at home and sells on Etsy. Thanks as ever to my marvellous co-host for running the courses with me, Billy or to use his real title – David Mayne. We’re going to be sorting out next years dates imminently and will email them out to our waiting list first so if you want to be on it just email me.