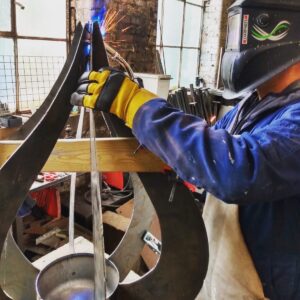 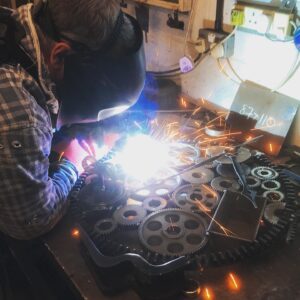 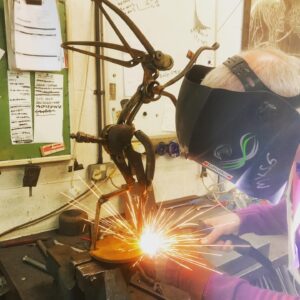 We’ve just completed our 22nd course, we seem to be running these constantly at the moment but we need to keep reminding ourselves it’s because we’ve had a covid backlog and not because we’re so fabulously popular, well maybe ? Anyway, it was four men this time, all fairly competent but with not much creativity between them so it was our job to coax it out of them. It was definitely in there, as you can see from the results. Nick wanted to make a log holder to stand next to his fire and it needed to be fairly precise ! So, after it took three of us to bend some flat bar round a beer barrel he was off and made a really nice piece of work by the end of the weekend. Richard wanted to make a plant holder for his garden so after lots of plasma cutting he started welding together what became a quite enormous piece of garden sculpture. Robert came all the way from Farnham to make a steampunk style clock. He had half an idea and two clocks so it was nice to see him play it by ear and come up with a unique piece of wall art or another way of putting it – the worlds heaviest clock. James just wanted to make a tortoise or a hare for his garden and settled on making a running hare from various scrap pieces of metal. Finding and selecting the right pieces was a bit tricky at first but he soon got his eye in and made a lovely garden sculpture. We’re full for the rest of the year but you can go on our waiting list because at this rate we’ll have to slot an extra course or two in at some point.