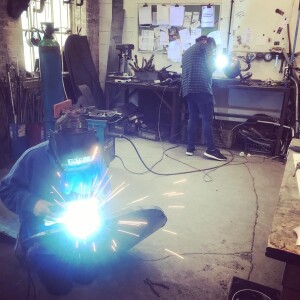 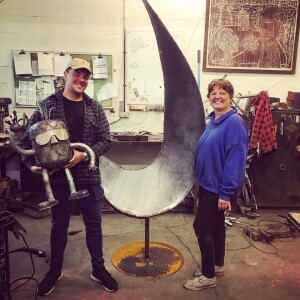 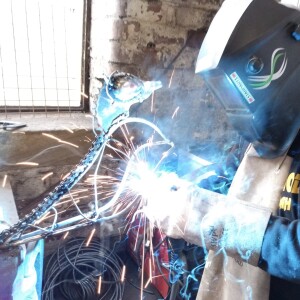 We’ve just done our eighteenth course and what was nice about this one was the fact that each of our students did something very different. In my room i had mother and son, Faith and Ed with some predictable family rivalry going on. Faith made what i think is probably the largest piece anyone has made so far on one of our courses, fully getting into her stride once she put her glasses on and could actually see what she was doing. Ed made a comic pineapple character based on a tattoo he had. In Billy’s room Ian made our first water feature from a some fire extinguishers and a serving dish i’d fished out of a skip. Savva had only done a clay course before but we didn’t hold that against him once he’d realised just how good metal is and made a junk metal sea horse standing on a rock. I really enjoy doing the courses, mainly because i like working with my longtime friend and fellow sculptor David Mayne. We both like seeing our students surprise themselves with what they’re capable of making so if you fancy a go, we’ve just released the first half of next years dates.